It is predictable that August and September are usually bumpy months for the stock market and that came true again this year.  After reaching record highs during 2018 the markets began to stumble in late August and through September.  This was due in part to the continuing trade challenges with China and the Federal Reserve indicating that it would continue to raise rates to curb or control potential escalating inflation.

The trade issues between the United States and China have caused minimal harm to date for the United States but has impacted the Chinese economy in a more profound way.  The Chinese government is throwing financial support behind their banks to assist them in lending more money to a wider range of businesses to stimulate their economy.  Their attempts to place heavy tariffs on products such as soy beans and pork has forced them to seek other sources of supply.  There is no doubt, at least in the short term that American farmers that supply soy and pork products will feel the pinch in sales.  It is hard to say who will raise the white flag first or what can be worked out to bring the trade dispute to a more balanced solution.  The United States has the largest per capita appetite in the world for goods and services and China has a massive capacity to provide the U.S. with needed or wanted products.   China’s economy is slowing.   There will be a tipping point where China will look to work things out with the U.S. rather than continue to allow their economy to slow further.

There has been much said about the Federal Reserve Bank continuing to raise the federal funds rate.  However, this is one tool that the Fed uses to control future inflation and stay ahead of the game.  Current economic models are currently estimating that GDP (domestic economic growth) is expanding at over 3%.  We have not experienced this level of growth in the last decade.  The extremely low interest rates that were needed to stimulate the economy during the recession are no longer needed.  The current task at hand for the Fed is to not only focus on curbing future inflation, but to determine a neutral interest range.  A neutral fed funds rate is a rate which does not hurt growth by being to high, but also does not foster inflation by being too low.

These two overriding themes, the trade dispute with China and rising interest rates, have rattled the markets of late.  When will the trade dispute end?  It may take a while to determine how much each party is losing as this dispute continues.  It is difficult to determine a time line and a finish line for this process.  However, there will need to be plenty of give and take to change the balance of trade and settle the dispute.

With respect to the Federal Reserve Bank continuing to raise rates, that will continue to occur as the economy booms and a neutral range for rates is determined.  Unemployment is at 3.7%.  This is the lowest level of unemployment since 1969.  Additionally, wages have grown by 2.8% year over year, another robust number that we haven’t seen in a long time.  The stock markets have been spooked by the rising rates because technically as rates rise there is an added cost of doing business.  However, with low unemployment, record corporate earnings and rising wages the economy is still running at record speed.  The markets have overreacted to rising rates and a trade dispute.  This will soon get better.  The economy is doing far too well for the stock markets to ignore.  I believe that the stock markets needed a breather to evaluate what drove them higher and to establish a new base.  The markets will bounce back.  The selloff is temporary.  We are now in the midst of an earnings seasons which is expected to produce strong returns.  Additionally, keep in mind that we have entered the fourth quarter of the year, a quarter that is traditionally the best of the year.

Please do not hesitate to call me with any questions that you may have. 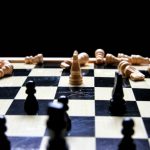