What a difference one year has made in the markets. We started 2018 with such great expectations that the market would continue to rise in lock step with the surging economy. The economy has continued to expand steadily while the stock market has run into countless hurdles along the way. It appears counterintuitive for the economy to strengthen while the stock market has taken such a beating.

The economy (GDP) grew at a 3% pace. This figure met expectations as projected by a majority of economists. The unemployment rate ended the year at approximately 3.7%. This is the lowest percentage figure since 1969. Numerous forecasts anticipate the economy to continue to grow at a 2.5 to 3% pace in 2019 with the unemployment rate dropping below 3.5%. Then what has caused the stock market to experience a major correction.

To begin with, the stock market has grown significantly reaching record highs within the recent years. That alone justifies the market taking a breather regardless of economic growth. Even a marathon runner needs to finish their race and rest up for the next race. However, that alone was not full justification for the market pulling back as far as it has. Geopolitical issues such as the trade and tariff dispute between the United States and China has weighed heavily on the markets as the fears of a global slowdown in trade could eventually impact corporate earnings. The rising U.S. dollar makes it more difficult for foreign entities to buy our goods and services. The impact on global growth could well be impacted by Britain leaving the European Union (BREXIT). In addition, the Federal Reserve Bank raising interest rates four times in 2018 and signaling more raises in 2019 caused the markets to shudder. Unfortunately, the FED did a very poor job of communicating that it would moderate interest rate adjustments if it appeared that the prior rate increases were doing the job of balancing the economy. The FED eventually recognized that it had used poor judgement in communication when the markets dramatically sold off. Later FED Chairman, Powell, did issue a statement that the central bank would “be patient and flexible in steering the course of interest rates.” Interestingly, the markets began a rebound following this statement regaining nearly 7% since Powell’s comments. This was one major factor that had been weighing on the markets.

Investor anxiety has certainly been well warranted with many investors wanting to cash out and run for the hills. The fear related to plunging markets is legitimate, but the answer has seldom been to sell your stock holdings. The reason is that if you sell out you are not invested when the market rebounds just as it did following comments for FED Chairman Powell and news that perhaps the U.S. and China might be making some minor headway in dealing with the trade war. Rest assured that even during these turbulent days, there are also positive opportunities in the recovering periods. The recent market pull backs do not resemble what we experienced in 2008 and 2009 when the economy was in a very poor state.

In a recent December interview on CNBC, Warren Buffett offered his thoughts on the market crisis. He cautioned that during volatile periods, it is best to stay calm and stick to the basics, meaning hold on to your investments while the market bounces up and down. As a calming note to the shareholders of his company, Berkshire-Hathaway, he referenced these lines by 19th century poet Rudyard Kipling in his 2017 shareholder letter.

If you can wait and not be tired by waiting…

If you can think – and not make thoughts your aim…

If you can trust yourself when all men doubt you…

Yours is the Earth and everything that’s in it.

Market downturns are inevitable, Buffett pointed out, using his own company as an example he talked about September of 2008 to March of 2009, when Berkshire Hathaway shares plummeted 50.7%. “Major declines have happened before and they are going to happen again”, he says. “Your mind may well become rattled by scary headlines and breathless commentary. And an unsettled mind will not make good decisions.”

There is little need for further commentary from me because Buffett’s words make a good argument for hanging tough during market declines. As always, I am happy to address any questions that you have.

I Wish You a Happy and Prosperous New Year, 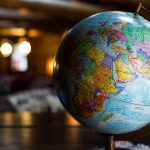